This week has seen two powerful assemblies for the School. Monday’s focussing on Remembrance and the contribution made by the fallen in Normandy, Monte Cassino in Italy and Imphal on the Indian/Burmese border. Ben Dyer’s wonderful playing of the Last Post supported our reflection moments of silence beautifully.

Max Pianta and the Senior Prefect team led an excellent Anti-bullying assembly on Thursday, and a big ‘thank you’ to all the staff and boys who supported ‘odd socks day’ today; no doubt this will become a regular fixture in our calendar.

At a ceremony on Thursday 7 November, Claires Court were delighted to be announced as winners of the Independent Schools Associations award for ‘Outstanding Community Involvement.’ The award recognises a school for the contribution and engagement within their local community for the benefit of both the pupils and the residents.

Over the past year Claires Court has been involved in numerous projects to give back to the local community, including our Senior pupils volunteering with Maidenhead Waterways Restoration Trust to clean the banks of the Strand water stream as it flows into Maidenhead, our Junior pupils ‘Clothes Swap’ and ‘Cake sales’ in conjunction with Cancer Research, and our annual ‘Charity Week’ to raise money and awareness of local, national and international charities.

The award also recognises engagement further afield to include work in other countries, such as our fundraising efforts to support ‘Charity Pearl The Gambia’ to build an education centre. During the October half term our Sixth Form students travelled to The Gambia to see how the money raised so far has helped whilst running activities at the education centre.

Claires Court has developed an outstanding reputation for the quality of its Arts teaching over the years, and it was exciting for us to have a number of submissions chosen for the National Exhibition in Leeds last week. Head of Art Joel Wareing represented us at the Autumn Study conference held to coincide with the exhibition, and was delighted to see that 2 of our submissions won First place, those being Jake Ward’s Self-portrait ‘Reflection’ in 2D Art and Zainab Saleem’s photograph ‘Glassy Eyes’ in this category at KS5. In the allied ISA Film & Digital Art Competition Alexandra Kulikova, (Year 7) has been selected as winner in the KS2 Computer Animation category.

Whilst in attendance at the ISA conference, Mr Wareing was delighted to receive on behalf of the school our award for Claires Court’s Outstanding Community from Olympian Derek Redmond and ISA Chair, Claire Osborn, and I am delighted he was able to receive this acclamation on our behalf. 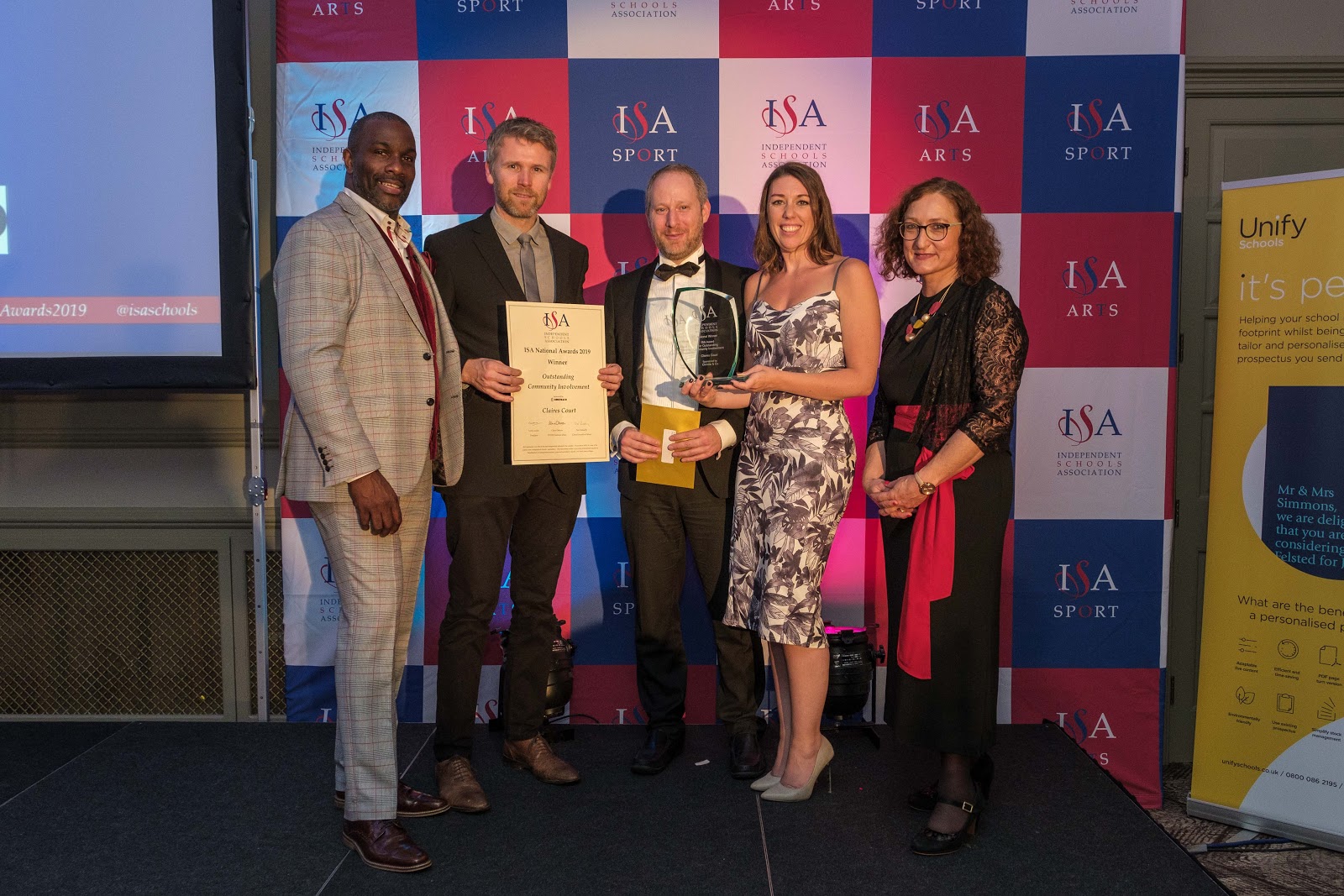 And finally, thank you to all staff, parents and future Year 12 students for bringing our Sixth Form Open evening to life on Tuesday. The range of subjects and breadth of activity covers all eventualities it seems, illustrated so well by the talks given by our Year 13 school leaders, James Lambert and Kayla Raeburn-James, supported by parent advocate Marion Raeburn-James.